A DAY AT CAMP EKON

Camp Ekon hosts campers from across Canada and around the world and it is only a short drive from Parry Sound on the shores of Lake Joseph.  It is a Jesuit philosophy based camp that has been partnering with Community Living Parry Sound for many years. Camp Ekon has its own program to teach young people how to become camp counsellors called the “Leaders-in-Training” program, or LIT for short. Many years ago the camp called Community Living Parry Sound to inquire about working together to better train the up-and-coming camp leaders about developmental disabilities and how to accommodate different children’s needs.

Ever since the call that day, going to Camp Ekon has become a summer tradition for children, youth, and staff at CLPS.  This year was no exception, but it was a little different.

In the past, part of the LIT’s training was to develop programming for the visiting children using the camp’s activity resources which led to interaction with the sleepover campers being minimal and informal.  This year however, no programming had to be developed in order for camp day to be a success; instead the visiting girls chose from the different activity sessions being offered in the morning and just joined in with other campers.  The kids from CLPS chose canoeing, archery and sports activities.  They participated with only the support of the leaders-in-training and the staff of Community Living stayed at arm’s length.

Community First is a philosophy that encourages people with developmental delays to participate in community based activities, affording them the chance to meet all kinds of people and form natural friendships. In the process it offers people without developmental delays the chance to learn the joys of being in relationship with all kinds of people promoting tolerance and understanding. 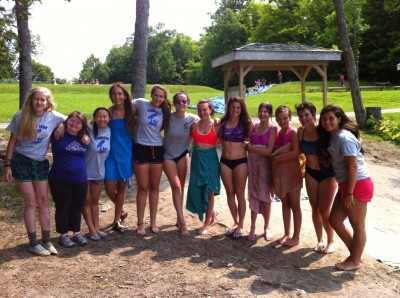 Camp Ekon continues its long history of being willing to learn about people who have developmental delays and to partner with Community Living Parry Sound to educate tomorrow’s camp counsellors on how to include all children in the wonderful activities of camping.