Down Syndrome No Barrier To College Degree 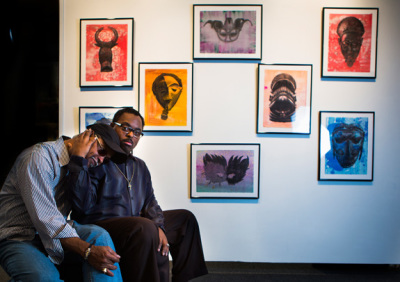 Ezra Roy, 26, holds Alvin Roy, who not only has been his parent but also his art teacher and mutual source of inspiration. Ezra graduated from Texas Southern University with honors over the weekend, earning a bachelor’s degree in arts. His work has been exhibited at the Museum of Fine Arts Houston and at Houston City Hall.

Ezra Roy waited underneath the glare of the arena lights Saturday with 800 other students from Texas Southern University.

With his dad, Alvin, tucked into a back corner of the huge arena, the magnitude of the moment was not lost on family, friends or the countless strangers who have cheered on Ezra Roy along the way.

“I’ve gotten so many calls from other parts of the country,” 58-year-old Alvin Roy said. “They’re rooting for him hard.”

Three days after his son was born, a doctor announced that the premature baby also had Down syndrome, a genetic disorder that causes growth and intellectual delays.

The diagnosis devastated him initially, he remembers.

But soon, he pulled himself together, looking at Ezra, and thinking, “It doesn’t matter. You’re still my son. We’re not going to accept you have Down syndrome in a defeatist way. That’s not the end of it.”

While the young man sat with his classmates, eagerly waiting for the ceremony to get underway and to receive his diploma, Alvin Roy savored the moment.

“I always wanted him to do good, but to get to this point, I’m pretty excited,” the proud father said. “I’m pretty choked up.”

As a child, Ezra Roy loved watching him paint.

“I’d watch his eyes, they’d light up when I used certain colors,” the elder Roy said.

For years, he encouraged Ezra, using colors to teach him, training him to paint and draw. They broke down complex problems into smaller, more manageable pieces. That lesson has been one that he shares as he teaches art to half a dozen or so students with disabilities each week, he said.

One day, the boy came home from Jack Yates — his high school — with college brochures and said he wanted to attend Texas Southern University.

“I flashed back to when he was born,” Alvin Roy said. “Initially, I was scared. I knew what challenges that would bring.”

Still, Ezra Roy took the SAT and gained admission to the school.

Like other people born with Down syndrome, he is short of stature. He dresses fastidiously and wears a cross on a thin gold chain around his neck and keeps his thin mustache carefully trimmed.

He has a speech impediment, and often his father or other relatives help interpret his speech. But when he speaks about art and color, his message is clear. Asked what the most difficult challenges he’s faced on his path through college, he said one word: “stereotypes.”

“I knew I could do art, I knew I could draw and paint,” he continued. He smiles wide, and likes showing people photos of friends he’s taken with his iPhone.

He picked TSU because his dad had gone there, and he loved watching the school’s parades and marching bands, which snaked by his father’s house.

Not that there wasn’t skepticism.

“Who are you to tell him he can’t do something?” his father used to wonder.

“At first, it was difficult for others to accept him. I saw him taking a lot of flak,” he said. “He persevered through that. And his artwork stands for itself.”

People with Down syndrome continue to make strides in college and other arenas of life. In 2013, a Kentucky woman with Down syndrome graduated from a technical college there, and in Spain, that same year, a woman was elected as a councilwoman for the city of Valladolid.

Ezra Roy also follows in the footsteps of people like Katie Apostolides, a woman with Down syndrome who studied art at Becker College, a small liberal arts school in Massachusetts.

Roy was 21 when he entered Texas Southern, majoring in art and minoring in theater. The school made accommodations for his disability, allowing him more time on his projects and exams, but did not modify requirements for him, his father said.

The first time she saw him, she thought he was accompanying a student, she remembers.

She’d thought that perhaps, because of his condition, he would behave differently from the other students.

Instead, she said, “he was the most mannerable person in the class.”

“I’m very proud of him and his parents,” she said.

His work ethic impressed her: he showed up early with his backpack and supplies.

“He made no excuses for having a disability, nor anyone in his family,” she said.

Ezra used anatomy charts from a hospital to study biology. He and his dad turned it into a dartboard and threw darts at the different body parts and organs.

They bought special software to break down essay topics and make it easier to write his papers, his father said.

And Ezra spent hours and hours working in the art studio. His pieces are bright, complex studies. There’s a series of complex masks, that he drew and then printed onto different colored papers.

Much of the work is in his father’s studio, just blocks from Minute Maid Park in Houston. In one corner, there’s a sculpture he made, painting a fetus into a small drum, then wedged into a wood frame that spikes several feet into the air.

Alvin Roy acknowledges there will be continued challenges in the future, as his son joins him at his studio. He may always need some assistance, he said. But they’re optimistic about the future.

“It’s very challenging for all of us, but we’re in this together,” Alvin Roy said.

Earlier Saturday, the excited graduate huddled with his father, telling him, “Dad, we did this!”

The father replied: “No, you did it!”