When Terry and Ellen Brenn first decided to access respite services for their son Michael, they were ambivalent. They had committed to being his only caregivers for life and had never even left him with a babysitter as a child. When Michael was thirty-six years old, Terry had a health scare that prompted him and Ellen to start looking at other options for Michael to get out of the house and have time away from them. “I had a tremendous feeling of guilt” says Terry. “I felt like I was betraying him, it took some time to get used to it and until he came home with a smile on his face, I knew I couldn’t stop feeling this way.”

Michael has now been accessing respite services for twelve years and he has grown immensely. He has worked with three different respite contractors and has built very strong connections with them all. Respite has introduced him to more community life and activities. He is now known and recognized by people in the community and welcomed everywhere he goes.

“We have really lived in a couple of very different eras,” Terry muses. “When he was born with Down’s Syndrome, public perception was that he should be admitted to an institution, people were afraid of him. Now he is accepted and respected as a community member and having respite has really helped with this.”

Respite contractors spend time with Michael three evenings a week. He does volunteer work at the blood donor clinic one evening, he attends music events in town and spends time learning everyday life stuff. Terry and Ellen started doing some future planning knowing that they will not always be here and had a respite contractor ease Michael into spending overnights away from them. Michael has adapted really well to overnights away, which is very comforting for them. Respite is preparing him for the future.

When asked if he had any advice for parents who are thinking about using respite services, Terry states “I highly endorse the respite program, it is a network for Michael and our family. Don’t feel guilty, give it a fair chance. You may have to try different contractors because not everyone is compatible. Forget about what you want and do what is best for your child.”

He also offers himself as a support for families and is willing to take phone calls and answer any questions. “If I can be of help to even one family we have done our work,” he says. For any parents wanting to take him up on his offer, please contact Community Living Parry Sound Respite Facilitator Kathy Pastoor at 705-746-9330, ext. 238, or kpastoor@clps.ca. She will provide Terry’s contact information and he would be happy to help.

Overall the respite program has been a great benefit to the Brenn family. They are very thankful for the support provided by Community Living Parry Sound when it is needed, and would recommend any parent that has access to respite services to take advantage of it. 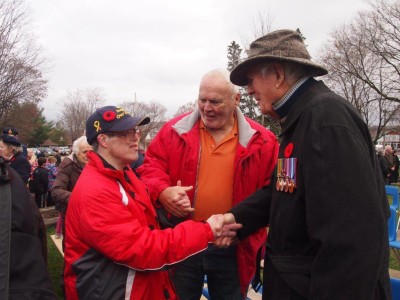