Getting to Balance Lynn Walmsley 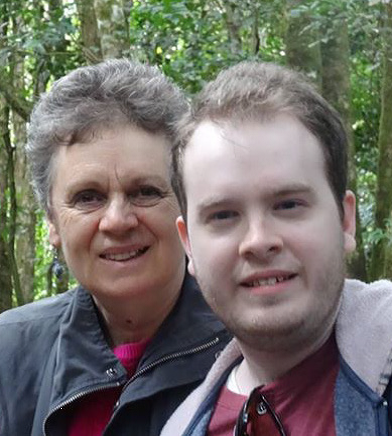 Lynn Walmsley is the mother of two adult sons and one adult step son, the youngest of whom, Robert, has several disabilities. Lynn’s work experience prior to having her children included working in the disability sector. This experience led her to seek out parent advocacy organisations upon moving to Australia when the children were young, which then sparked Lynn’s quest for inclusive education and inclusion in community for Robert. This article has been written with input from Robert Walmsley- Evans.

My son Robert is 23 years old. We have received some paid supports since
he was three years old. In the past seven years we have become much more
intentional in finding natural, unpaid supports amongst friends and family, as I
am very conscious of the importance of these relationships for the longer term
wellbeing of Robert.
Something I have discovered is that involvement of family and friends is much
more prevalent than I used to think. Many of these people are those we have
interacted with in other settings, often over long periods of time. One in
particular has been our neighbour who we have known for over 20 years. We did
not know her very well for a long time, but in recent years she has become an
integral part of our lives.
When Robert was very young, the first paid supports we had were to enable
him to have other people to interact with, and to assist Robert with exploring
his creative skills such as writing and painting. This also freed up my time to
keep our home running smoothly; at that time Robert required a lot of specialist
appointments, attended therapy weekly and did daily exercise. Assistance at
home helped me to do all that was needed to engage Robert successfully in all
his endeavours.
Over the years we have refined our use of paid supports. Once Robert started
attending school the week days were largely taken care of, therefore support
workers were mainly assisting Robert with recreation, getting exercise, and
completing his homework and projects. We always had an eye on inclusion
in the community and we would have a paid support worker to assist with our
social soccer group, every second Saturday. After the game, everyone would
come back to our house for afternoon tea and the kids would run around.

We took advantage of every
opportunity for Robert to socialise
with his peers and he is still friends
today with several young men from
preschool and primary school. As
a family we take education very
seriously, so during Robert’s school
years there was a great deal of input
making sure he was getting the best
possible education. Both support
workers and family and friends
contributed and helped us get through
projects like how to bind a book or
make a model of a Martian!
During the last couple of years of high
school it was becoming very clear
that things were about to change.
Robert would need paid support to
pursue his education (Cert III in Events
Management at Tafe) and developing
his skills in Photography and Writing.
After fifteen years of attending events
on developing a ‘Good Life’ and five
years on sessions about Circles of
Support we decided to finally take
action. We invited others to help
us develop a vision and plan with
Robert for his present and future.
We embarked on forming a Circle
of Support comprised of family and

friends to assist us, with the help of
a facilitator. Approaching people via
our facilitator was very difficult for
me initially. I knew we needed other
people involved but didn’t like to ask.
To my surprise, the response was
terrific. Several people on Robert’s
circle are past support workers who
were with us when they were students.
One of them lives in another city and
keeps in touch when in town and via
social media, another one lives just
around the corner.
Many great suggestions have come out

of the circle meetings. When we
wondered about how Robert could
enjoy more reading, a circle member
suggested doing a letter box drop in
the local area to see if someone who
also loved reading similar subjects
such as Philosophy, Shakespeare,
Bill Bryson, Fantasy, and Classics,
would like to read with Robert. Three
weeks later we had a tap on the door;
our neighbour Anne asked if we had
had any success. She had been away
and stated she “loves to read.” She
came to read with Robert for long
stretches once per week and we have
got to know her very well. It wasn’t
the original intention but Anne has
become a great backup on occasions
when paid support workers are late or
can’t make it. Another circle member
had a contact in a café who agreed to
Robert exhibiting some of his photos,
and another member took Robert to
another café and discussed with them
the possibilities there.

The Plan therefore helps
keep us very focused and
guided as to what we ask
for from potential support
workers and where we need
to engage family and friends
more to ensure a rich life.

While the circle members can help with planning and with making steps towards
goals, paid supports are another important way of getting the goals on the Plan
accomplished. I will use Robert’s interest in photography as an example; first he
learnt skills in photography attending many courses to develop his knowledge
and expertise. He entered both speciality and mainstream exhibitions including a
project taking portraits of refugees – Refugrow – which was exhibited at City Hall.
He has been included in the People’s Choice of the Mayor’s Annual Photography
Exhibition and had his own landscape exhibition which he found very exciting.
His photography endeavours have been supported by everyone including his
support workers (they assist Robert to go out and take photos and upload them,
and to attend a regular professional development group). Friends and family help
to choose themes and which photos to exhibit and attending the launches and
exhibitions. Thanks to intentional planning and the right supports Robert has
developed his photographic skills to a high standard. Seeing the satisfaction
of Robert having his own Photo Exhibition complete with launch and VIP’s was
priceless!

While the circle members can help with planning
and with making steps towards goals, paid supports
are another important way of getting the goals
on the Plan accomplished.

We continuously refer to the plan, and make sure Robert’s goals are being
attended to. It is vital that paid workers do not impinge on his family relationships
and friendships. We make workers aware of the important key relationships in
Robert’s life so that they know to treat those relationships respectfully.
We do not use paid supports for things like going to the movies as we believe it
is best for family and friends to enjoy movies and live events with him. Shopping
with purpose (for a secret birthday gift for me!) or getting a haircut is acceptable,
but not just going to the shops.
Family events take precedence and we rearrange things if necessary to
accommodate. For example, if we can’t fit in a request by a friend to take Robert
out to fly a drone, we change the scheduled support. The flexibility of our selfdirected
support allows this to happen. Support via agencies is less flexible and
therefore Robert has that mostly during the week when changes are less likely to
be necessary and the routine is more predictable.
We have become more refined in our interviewing skills and expectations, so
that if those expectations are not met after a few weeks we let those people go.
Having the plan was a great step forward because if I feel pressure by a service
to go down a path they want I say, “It’s not on the plan.” The Plan therefore helps
keep us very focused and guided as to what we ask for from potential support
workers and where we need to engage family and friends more to ensure a rich
life.
Robert’s plan for his life is big and expanding; as well as continuing photography
Robert has plans for more travel, increasing his work hours, keeping in touch
with old friends and developing new friends, attending university and publishing
his novel. He will need the support of his family, friends and support workers
so that his plans and dreams continue to be pursued successfully. Through
intentional planning and the right balance of support Robert’s future is bright and
it belongs to him.

« Previous
Graduation Day for the Hospitality and Tourism students!Next »
Family: the tie that binds