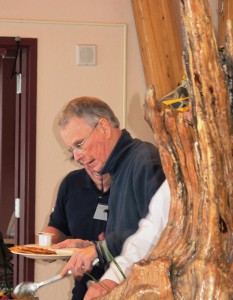 The simple dictionary definition of “inclusion” is the act of including or the state of being included.  Carl Dalrymple lives in the state if being included.  He is often seen by local citizens helping out in various ways and playing a vital role in our community. Carl has not only been included by actively volunteering but he has also been employed at various local restaurants. Carl volunteers with the Victory School Breakfast Club, the Knights of Columbus and various other organizations and at events such as the Moose FM Radio-a-thon Salvation Army Toy Drive. The Knights of Columbus recognized Carl with the 4th Degree in 2007. He represents what inclusion is and what it can be for others with an intellectual disability.