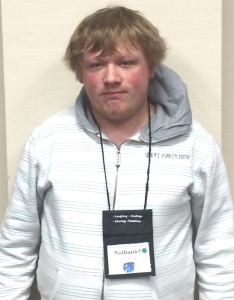 In 2004 Nathaniel Hewett was transitioning into high school and very determined to succeed. Just like any of us he has had his moments of feeling like giving up but he has continued to work hard toward his dreams. After graduating from high school he began to work toward obtaining his Developmental Service Worker diploma through an apprenticeship program with Loyalist College.

His successes are the reason for his being the recipient of an Anne Stafford bursary and James Montgomerie Award this year from Community Living Ontario. In addition, he participated in the Unity in Diversity Club through the Parry Sound High School and gave cause to further celebration when presented with the James Montgomerie Award for inclusion.