There was no down side to the conference for Self-Advocates from North Eastern Ontario held in North Bay on March 5th, 2014.  It was the most infectiously optimistic gathering I have ever attended and for that reason I am grateful to have been a part of it.

I asked Katharine, one of four Self-Advocates on the planning committee, what her favorite part of the event was. “For me it would be meeting new friends, great speakers, and learning about the healing circle. Also great singer the one night! Also for the nice CTV news reporter and meeting the MPP he really liked what I said on the news. Great.  Also I shared my story with some people who wanted to read it, I wrote my own on paper and handed it out the last day. And all of us that worked on the project we were all awesome! I would like more of these Conference’s to happen around the world, would be great to get together with people and learn and share our stories and also help them in any way we can. I am up for the challenge!! Are you??”  I wonder who will pick up this gauntlet. 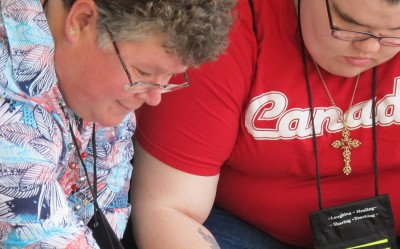 Bev, another self-advocate on the planning team, came to the conference on the heels of participating in a training event to learn public speaking skills.  She said getting to speak in public by introducing invited guests at the conference and “seeing a lot of new faces” was the best part for her.  The speaking challenges that Bev took on were handled with ease and aptitude.

The Self-Advocate conference began with a vision inspired by Jo-Anne Demick and Kim Gauthier of Community Living Parry Sound and the financial backing of a Trillium Grant they spearheaded.  It took eight months of hard work to meld together the talents of each planning committee member to accomplish a great mission; a ground-breaking opportunity for people living with disabilities to spend two days together being treated like anyone else. Kim says, “For me the best part was having self-advocates who were not only involved in all planning aspects for this conference but who took a leadership role during the actual event including facilitating various sessions at the conference”. 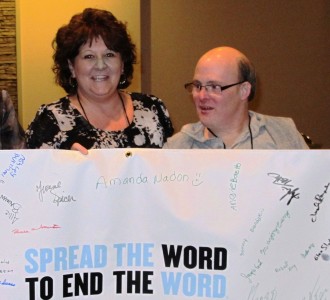 Cortney Gilligan, committee member and self-advocate, suggested we try to get some ‘media coverage’ for the event.  That happened. One reporter who showed up at the hotel on Day Two of the conference observed 80 self-advocates (with every manner of disability to contend with) walking through a scrumptiously laid out lunch buffet line “just like anyone else would go through a lunch line”. This woman seemed stunned by what she saw.  “I am here because Vic Fedeli asked me if I was coming” Laurel Campbell of  Metroland North Bay said, “I had no idea what I was walking into”; and the look of awe on her face was mirrored on the faces of other media people present.

The event was infectious as participants gathered together in the spirit of openness, willingness and gratitude, 100% accepting of their so-called ‘disabilities’.

An invaluable member of the planning team was Jill Faber of HSA Canada a professional facilitator who knows no bounds when it comes to making things happen.  Jill expresses her experience of the conference by saying that, “the best part for me was to witness the collective thinking and actions of a group that is asking for change in their society. The overall energy, strength and optimism were really incredible and very humbling to be part of”.

People helped each other as it was needed and received support when it was wanted. They said thank you for the efforts of organizers, speakers and hotel staff.  Honest sharing of heart breaking stories was met with compassion and no judgement. A commitment to speak up and speak out about the things that are not working for their lives was solidified.

Stephanie Haskins, self-advocate, has a way of saying things that always gets to the heart of the matter.  When asked what her favorite part of the conference was, she replied, “I like it all”. 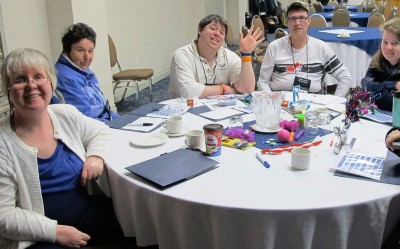 My Life, My Future, My Choice was a huge success. I don’t think most people realize that people who live with a disability spend almost every day of their lives being treated differently. All of the efforts and funding for this conference meant that for these two days everyone who attended, with or without an identified ‘disability’ were treated the same. That is huge.  My hope is that the vision of inclusion that started in the hearts of two women who have devoted themselves to evolving the field of developmental services, turns into a wave of oportunities for people without physical or intellectual disabilities to meet and enjoy the company of those who live with them.