50 years on L’Arche harnessing the power of ‘With’

Anniversary marks shift in attitudes toward people with intellectual disabilities

When Jean Vanier started L’Arche 50 years ago, his plan, though he didn’t have much of one, was to make a home with Raphael and Philippe, two men with disabilities. He didn’t fully understand the significance of what he was undertaking, but operating more or less intuitively, he set out “to live simply, to love tenderly.”

At that time, people with intellectual disabilities were mostly warehoused in institutions; some lived at home. He once saw a teenager kept on a chain in a garage.

It was clear, however, that Raphael and Philippe, who had known much rejection, needed friendship in this new venture. The house that Vanier — son of governor general Georges Vanier — offered in the village of Trosly-Breuil north of Paris was poor; there were no toilets, only a single water tap and a wood-burning stove. But they would sit with each other at the dinner table, as friends and family do, and in the day, work with each other. Some, obviously, needed more help than others. 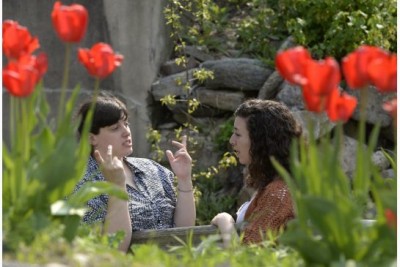 This idea of doing things “with” instead of “for” people with disabilities is the core of a L’Arche campaign (www.discoverwith.ca ) in Canadian magazines and transit billboards. The ads show two people, one with and one without a disability sharing the ordinary pleasures of life — riding bikes, making dinner, having a drink. “With makes all the difference,” the ad reads. “When people of differing abilities spend time with one another, they create a better world.”

The campaign echoes L’Arche’s founding ideas — everyone has something to offer — which were considered radical in the early Sixties. Over the years, movements for inclusive living and independent living for people with disabilities have become well established. L’Arche grew, as well. Today there are 146 communities in 35 countries, nine in Ontario, and on June 7 members will gather in Waterloo for a celebration of L’Arche’s 50th anniversary.

“Jean was not just saying we should just tolerate people with disabilities, he was saying they bring something to the table,” says Pamela Cushing, a cultural anthropologist who lived in L’Arche homes from Vancouver to Antigonish, N.S., for a year as part of her PhD research.

“Instead of saying he can’t walk or she can’t talk, which are all negatives, Jean’s inversion was that these could be seen as gifts,” says Cushing, a professor of disability studies at King’s University College at Western University. In that way of thinking, someone who doesn’t speak would have the “gift of silence.” The genius of Vanier’s ideas, which were inspired by his Christian beliefs, was that they resonated with people who weren’t interested in religion, too.

Still, many believe the work of L’Arche is charity, says John O’Donnell, a spokesperson who lives in Halifax and who initiated the With campaign. “Instead, it’s about justice, about living with and doing things with people of differing ability.”

O’Donnell has often heard people say: “I couldn’t do what you do.”

“Our lives are not all hard work and suffering and sacrifice,” says O’Donnell. “It’s about living in joy with one another.”

There are still challenges, he adds. “The only way to move to the next level is by genuinely including people.”

Recently Toronto has seen how resentments can unfold when people with disabilities are included in a residential area. Councillor Doug Ford said a home for children with developmental difficulties in an Etobicoke neighbourhood had “ruined the community,” a sentiment shared by some angry residents attending a public meeting on problems at the Griffin Centre. “Locate the facility in another place,” one told the Etobicoke Guardian. “This is a community for people, not for that. I have nothing against the kids. If the kids need help, they need help.”

Amanda Winnington-Ingram is one of the young people featured in the L’Arche ads. She has an eager smile. She’s travelled to Paris and New York; she practises yoga, she likes the movies and making art. Her interpretation of Van Gogh’s “Starry Night” is full of energy. She also has Down syndrome.

You see in Winnington-Ingram, who is wearing a T-shirt that reads Be Yourself and has a unicorn imprinted on it, the joy that O’Donnell speaks of. “Inside my heart, I am happy,” she says.

L’Arche in Canada is 45 years old. The first community in North America, called Daybreak, opened in Richmond Hill in what was a rural area with a barn and old brick farmhouse. It’s since been overtaken by suburbs.

Courtney Burns, 26, lives there and has a stack of scrapbooks and her computer with her to help explain her interests. She keeps the books as a hobby, and uses her computer to watch anime videos, which she adores.

She opens one book to show a photograph of a dark-haired young woman. “This is Emily,” she says. She’s written underneath the photo, “my friend from school.” The two met at church.

Emily Puccini, 23, who recently graduated from Tyndale College, gets together with Burns to see movies — Avatar is Burns’ favourite — go shopping (she loves sales) or visit Tim Hortons.

“I gain trust, knowing I am safe with her when I am out of the community,” says Burns. “She’s a good example of how to handle things and it gives me confidence.”

She explains that with her disability it’s hard for her to understand what people say and has to ask them to slow down. She also has epilepsy.

“I do feel different because of my disabilities,” she says. “I can’t do certain things. One thing I’m learning is cooking. I also have to ask for help to count change.”

She works in the Daybreak art studio and in its wood workshop. “I’m very strict about work,” she says. “I want to show them I can get a good job in the community.”

For her part, Puccini admires Burns’ constancy in friendship. Puccini may forget to call to catch up, but Burns doesn’t. “She’s a model of perseverance. I went to a birthday party where she used to live. I was amazed — she was acting like a leader in her house, where some people were more disabled than she was. Her love was obvious.”

So is the affection between Joe Child, who ran the Woodery, the wood workshop at Daybreak, and David Harmon, who worked there for many years. They manufacture surveyors’ stakes, bed tables and now during the Ontario election, stakes for campaign signs.

Child, who is 72, recalls having a bad day at the wood shop. “Everything I touched turned to dust.” But it was a Friday, the day that staff go for lunch at Joe’s Hamburgers on Yonge St. “I just didn’t want to go. But we got in the car and Dave sat right behind me. He leaned over and started massaging my back.

“I told him, that was so good, I’d raise his pay to a million dollars.

“It was a throwaway line.

Harmon, who is 67, says their friendship is like that of two brothers.

Cushing interviewed 100 people who had worked at L’Arche as part of her PhD dissertation. Almost everyone she spoke to reported a similar experience: “Their minds were blown about how cool people with intellectual disabilities were.”

However, what we read and hear about people with disabilities tends typically to cast them as people to be pitied, or who are a burden or who are villains. “Then it is naturally hard for us, the public, to think outside of those grooves,” she says.

It’s not just about getting out positive stories. “The rescripting of how the public imagines disability must be messy and diverse if it is to be believable. Most people will not buy a story that someone prefers life post-brain injury or post-losing a limb to cancer, but they will listen to a story about how that life has changed in complex ways, some of which the person prefers or are more meaningful.”

Meanwhile there are examples of television and online shows in which people with disabilities have roles as part of the regular range of human diversity. Some are assertively confident, funny and to their fans and followers they are super-cool.

“How’s Your News?” was a peppery news/comedy show in which the reporters, live wires all, had various disabilities. Zach Anner, a 29-year-old comedian with cerebral palsy, had a popular travel show on the Oprah Winfrey Network; though the show was cancelled, his videos still have a wide Internet following. The musical comedy Gleefeatures a cheerleader with Down syndrome.

When Cushing invites people with disabilities to lecture she often asks them to tell students one thing they wish people understood more about living with a disability. One of the most powerful responses has been: “Yes, I have a disability and it affects part of my life. OK. Now, let’s move on to everything else there to know about me.”

They want people to know: “I am so much more than just my disability.”