For many years now, I can’t remember for how long now that it has been; Peter has been a fan of the Mantracker show but specifically the “real” and original man tracker Terry Grant. Pete recites some of his sayings: “learn your land, learn your prey, He’s coming to get you!”  Faithfully Pete doesn’t miss an episode.  Over the years he has received and purchased DVD’s and t-shirts of Mantracker.

In more recent years Pete has wanted to buy clothing in Camouflage like contestants on the show. He was focused on purchasing cowboy boots and a cowboy hat like Terry Grant, the boots are brown the hat is black.  He is looking for the dark coat that Terry wears as well.

Once his purchases were paid for, he donned his own tracker attire; we headed off to meet Mantracker.  Pete was very excited during the 45 min drive to the hometown of Terry Grant, in Avening, ON. We arrived and were lucky to meet up with Clare a resident of the town; she was going to alert Pete when Terry arrived.  Pete was indeed the first person to chat for a good 10 minutes prior to the engagement. Terry   spoke for an hour and a half. Pete sat riveted to every word.  On the way home Pete retold the story and said it was his best day. He would like to go to Mantracker’s for dinner.

Despite the rainy weather, nothing could take away from the shine in Pete’s eyes and smile. Dreams come true for Pete on this day. 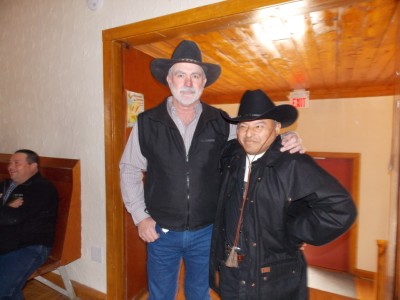 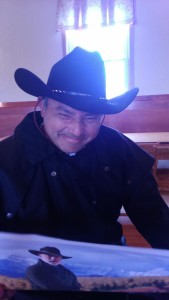