Douglas Brear can now add ‘recipient of the Order of Parry Sound’ to his already extensive list of certificates and awards. This prestigious honour is awarded annually to one deserving citizen by the Mayor of Parry Sound in recognition of their tremendous contributions. To everyone who knows him, Doug is an incredible, hardworking, kind and compassionate person. Even those who don’t yet have the pleasure of knowing him are unable to ignore his exuberance and charisma.

Doug has spent the majority of his life here in Parry Sound, and has contributed to the wellness and prosperity of the town in a great number of ways. He’s someone who prides himself on his work ethic, and has volunteered countless hours helping many businesses and organizations in the area. His family, friends and people who support him have nothing but praise for his time spent volunteering for Bearly Used Books, the YMCA of Parry Sound, the Charles W. Stockey Centre, the Parry Sound Public Library and the Salvation Army Thrift Store (to name a few).

Not only has Doug represented the Town of Parry Sound on numerous occasions, he had the honour of representing the province of Ontario as an ambassador at the National Down Syndrome Conference in British Columbia. Doug’s hard work earned him three nominations for the Order of Parry Sound, but his compassion and his care and love for Parry Sound is why he was recognized.

Thank you, Doug, for making Parry Sound a place we are proud to call home. 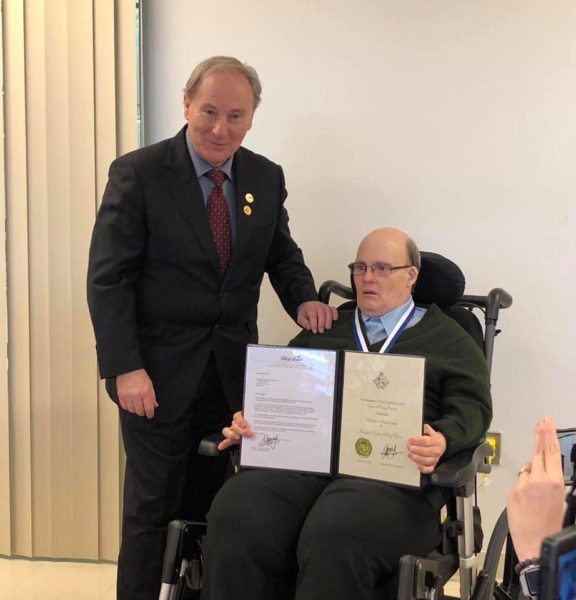