PARRY SOUND – Randy Barksey is the dishwasher at a downtown business.

Randy returned to full-time employment after attending the Leading into New Careers (LINC) program, a program designed to assist those with intellectual disabilities find employment and as a source for support for those employed. LINC operates under the umbrella of Community Living Parry Sound helping those with physical, mental, and intellectual disability train for and find jobs, with ongoing support once employed. With support provided by LINC Randy graduated from Canadore College’s hospitality course. 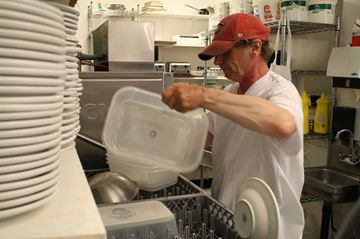 Barksey has a learning disability that makes it difficult for him to get work and keep it. He had to quit his last job 25 years ago after the stress, long hours and working conditions took its toll on his health. He’s now proud to say he’s been working at Wellington’s since May 28.

He loves his job so much he’s shown up unscheduled and goes above the job title.

“I’m called jack of all trades, right,” he said with a smile in his voice to his supervisor head chef Tommy Ramsay. “(I’m) always on the go. The girls need anything in the kitchen I grab it, like glasses up to the bar, mopping, say the girls bring dishes to the kitchen I say, ‘give it to me get out there right away, I’ll clean them’.”

In February, Barksey decided to re-enter the work force and went to LINC, which arrange his enrolment in the hospitality course. The course included training in customer service, communication, dealing with difficult people, safe food handling, WHIMIS and CPR.

“I think the course gave him a lot of confidence as well,” said LINC employment facilitator Taylor Robinson, adding it also showed Barksey he can raise concerns on the job with his supervisor.

LINC also provides ongoing support, and a job coach who goes to the worksite at the beginning. With Barksey, the job coach wasn’t needed after the first week, with Wellington’s staff helping and his quick learning curve.

When Wellington’s owner Mike Reeves saw Barksey’s resume he called him up and was surprised when he arrived for an interview 10 minutes later and not the next day as is customary.

“When he walked in here, first thing I noticed about him was he’s eager,” said Reeves, who said he didn’t know of LINC’s involvement with Barksey.

LINC is currently assisting 31 people in the area, of which 17 are working in Parry Sound while others are upgrading skills.

“I would tell (employers) we’re just trying to make people who have the abilities for the jobs they are looking for,” said Robinson. “We don’t heavily focus on the person’s disability. Employers are looking for abilities. A disability is something that might originally have some barriers – we work with individuals to get over those barriers and be successful at work. We sell their abilities, not their disabilities.”

Now happily employed, Barksey plans to continue his education. Over the years he regularly updates his knowledge through college courses, including computers and languages, and plans to sign up for more this fall.