September of this year marked a bittersweet victory for thousands of people across Ontario and, closer to home, for fifteen people who receive services from Community Living Parry Sound. People who had been diagnosed with a developmental disability were generally sent as children to live in Ontario Government run hospitals and training centres. Many did not survive the experience.

Survivors received cheques ranging from $2,000.00 to $42,000.00 for systemic abuse (physical & sexual) and harm experienced while residents of the Huronia, Rideau, and Southwestern Regional Centres. These three large institutions, which were all shut down by 2008, were the subject of a Class Action Suit launched by two former residents. This suit was pivotal in the decision for Premier Kathleen Wynne to stand up in the Provincial Legislature and apologize to the survivors. The province settled the case out of court for three million dollars, to be distributed through an agreed upon claim formula. While the settlement allowed for a quicker resolution, the majority of the claimants being seniors, it is a sad fact that those without the communication abilities to tell their stories of abuse were only granted the token amount of $2,000.00. Those who could tell their stories left no doubt in the minds of the interviewers that abuse affected all those who were institutionalized.

Claimants were able to receive the services of Joanne Boulding and her colleagues, lawyers at Lake Country Community Legal Clinic (LCCLC), to access their files and complete their claims. In October at a small victory celebration at CLPS, Joanne Boulding commended the claimants on their strength, determination and courage in their fight for justice. She said, “The Government of Ontario has apologized for the abuse, neglect, beatings and other mistreatment that you have suffered and that this money is for YOU, because of what happened to YOU”. She advised that no one could take away any of the funding they currently receive because of the settlement, and it was for the survivors to decide what the money should be used for.  Joanne distributed the files from the institutions to their owners. Some of the files contained pictures of people as children that they had never seen, details of their history unknown to them, and letters from their family that may never have been shared with them. The documents also contained endless pages of medical procedures, purported dental care, (cavities were rarely filled, the teeth simply pulled), treatments for worms and lice, no reports of abuse, and copies of form letters to parents saying everything was just fine with their child but it was best not to visit for one reason or another.  Some individuals had banker boxes of files, while other’s files contained very little. One individual’s file was not received until the day after the claim deadline, adversely affecting her level of compensation. 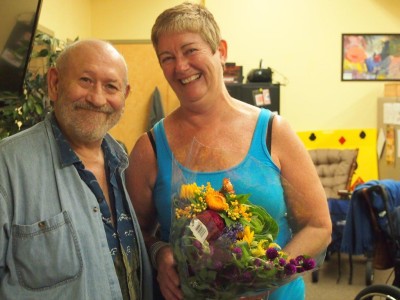 In appreciation of their support, Tom Schweertman presents flowers to Joanne Boulding of LCCLC at a recent celebration at CLPS for survivors of former institutions

One of the women was placed in Huronia as a child of four and spent 21 years institutionalized. This same woman has lived in Parry Sound  for the past 37 years, lives in her own apartment, needing minimal supports and has fully participated in and contributed to her community. She can’t remember much good (while at Huronia) other than going for walks, playing cards, singing, dancing and going to camp. While she does have some good memories, her vivid memories of the abuse she suffered at the hands of staff at Huronia are heart wrenching. She also remembers sleeping a lot. ”NO MORE HOSPITAL”, she said at the celebration, “I want to live in my apartment where I get to do what I want all day”.

One of the men who was placed in Rideau Centre and also lived at Huronia Centre was able to make claims against both institutions.  A small boy of eight years when admitted, he spent the next 16 years, often ridiculed about his heritage, and treated brutally. He does have some good memories of having a few friends, going bowling once, gardening and watching The Littlest Hobo. He also remembers they slept together, ate together and never had any private time. He remembers being chased by a dog which was terrifying, being locked in a small dark room and having hot grease poured over his head for doing something “bad”. He is so happy to live back in Parry Sound, in his own apartment and has been able to build relationships in the community, reconnect with family and actively contribute every day. He says,”My apartment feels good, I have privacy, freedom and cook what I want, even chili”.

The victory was bittersweet. While the apology and compensation do acknowledge what happened to people for decades behind the walls of the institutions, they in no way erase the trauma suffered by survivors. It may be hard to believe for some that this could have gone on for so many decades but we only need to look at what happened in the Residential Schools to First Nation Children to see that these things can and did happen. And the believing is the sweet part, finally somebody believed people and something was done about it.  And the money, the money means a lot to people, all who live below the poverty line. The money allows for the fulfillment of a wish or a dream, or sometimes just the means to get their teeth fixed.

Twelve more facilities across Ontario are expected to settle within the next two years.

« Previous
Next »
Steven and Susan