To see them on the street you would never guess that Steven and Susan have something in common. They both live very typical lives for their age; they both live with spina bifida. Susan spent much of her childhood at Toronto’s Hospital for Sick Children receiving treatment to improve her quality of life.  She remembers how difficult it was to live with the uncertainty of never knowing when she would have to be admitted back into hospital or how long the next stay would be. The financial strain of her situation was an immense issue for her family and she recalls those days like they were yesterday.

When Susan met Steven in the summer of 2014 at Parry Sound Air going on an airplane adventure; she immediately felt a connection to him. Their meeting brought about memories of her childhood that bred compassion for Steven who is living with the same difficulties that she did. Susan decided that she wanted to help Steven in some way; in a way that she would have appreciated as a child.

Susan is blessed to be living in a family home situation where she experiences the joy of giving every year. Her family home provider, Laura, chooses a charity every year to give to. Susan, following Laura’s example, decided that she wanted to raise money for Steven so that some of the financial strain of frequent hospitalization and travel could be alleviated for him and his family. She and Laura planned a yard sale at their home in the summer of 2015. They raised over $650 to donate to Steven. Some people who walked through the yard sale didn’t see anything they wanted to purchase, but Susan had provided a donations jar and told them what she was raising money for; many people donated.

When Steven heard that Susan had raised money for him he was shocked. Steven is quite a giver himself, he has raised money for the Spina Bifida Association and Toronto’s Hospital for Sick Children. He was also the focus of the Dairy Queen Miracle Treat Day in Parry Sound, spending eleven hours that day working behind the counter serving treats to raise money. This year for his birthday he has raised $1000 to give to West Parry Sound Health Centre Emergency Department so that he can have his name on a brick on the donor’s wall. “It’s my birthday and I get to decide what to do for my gift,” he says. His mom, Carrie, says his greatest passion is fundraising for hospitals. Having someone give to him is a bit foreign to him. Steven and Carrie agree; “She is so kind to donate when she doesn’t really know us.”

Steven is 11 years old and has spent approximately three years of his life in hospital at various times. He has an outstanding knowledge of his diagnoses and the implications that they have on him and his family. Outside of dealing with that he is quite a little jokester who loves to play video games and with his dog Thor. He has friends at school that miss him very much every time he has to go to hospital. He is hoping that as he gets older his visits will be reduced to annual check ups. Susan reassures him that this will happen, she now only has to go to Toronto once a year to make sure everything is ok and she is maintaining her health.

Steven says he is getting tired of the travel, surgeries and needles but he has learned to cope with it well. “Let’s just say I have a punching bag,” he laughs. When asked what he will do with the money he ponders “Well, my mom can use some for gas and expenses when she is at the hospital with me, otherwise I would like to pay off the doctors to stop giving me needles, and maybe a little bit of sushi at Mandarin!”

Carrie is amazed at how much generosity there is in this little town. She admits that she never really thought about fundraising for others until Steven was born. “Once you live in a situation like this you realize how important giving is,” she states. Laura and Susan echo her thoughts, “Giving feels so good, if more people would give the world would be a better place.”

Susan’s intentions are only to share generosity with Steven; she doesn’t expect anything in return. She has experienced the feeling of need and the true blessings of giving to others. Steven is very thankful for her thoughtfulness “Thank you so much, now I want to raise money for you,” he tells Susan. 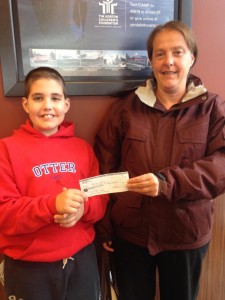 Appearances can be deceiving. You just never know who you may have something in common with and when you might cross paths. Open minds and open hearts lead to situations like Steven and Susan’s. Parry Sound is a very lucky town to have such generous people make it their home.