No more wait lists. One provincial minister in charge. And recognition that all people with developmental disabilities have the right to services throughout their lives. Those are the key recommendations in a long-awaited report released by the Select Committee on Developmental Services. 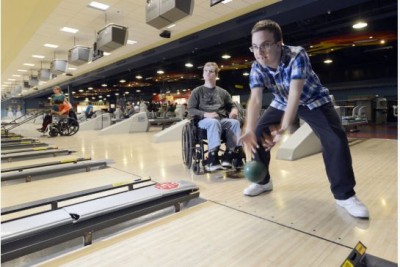 Gloria Noseworthy has been waiting three years for adult funding for her 23-year-old son Zachariah, above right, who has autism and other medical conditions. She hopes the report’s recommendations are implemented soon.

Calling the situation “urgent,” the all-party committee said it was “deeply troubled and alarmed by the range of barriers confronting persons with developmental disabilities.” As a result, they said, many families “feel pushed to the brink of disaster.”

To address the confusing jumble of services provided by multiple ministries, the report called for one minister to take responsibility — the minister of community and social services — by leading a special inter-ministerial committee of 10.

That group’s first priority should be ending all wait lists for services and supports within the next 12 months and outlining a plan with goals and timelines to implement the report’s other 45 recommendations, the MPPs urged.

“The committee firmly believes that all people have a right to appropriate and timely supports and services throughout their lives,” said the 44-page document, which came after four months of public hearings across the province and considered more than 300 submissions from parents, advocates, people with disabilities and experts in the field.

“The provision of developmental services and support should be mandated and wait lists eliminated,” it said.

The report comes after the Liberals promised to add $810 million in funding over three years to the $1.7-billion annual budget for developmental services. One key goal of that money, announced in the spring budget, was to get rid of wait lists within two years for children and within four years for adults seeking direct funding to help cover costs of personal support workers, day programs, respite, training and other supports.

Tuesday’s report set a 12-month deadline to reflect the desperation expressed by many families, said Conservative MPP Christine Elliott, the driving force behind creating a select committee to develop a strategy.

“Whether it’s done within a strict one-year time line, or if it takes a little bit longer, we just wanted to signal how important it is that work be undertaken immediately.”

The report’s focus on eliminating wait lists and its message that providing services is a social responsibility — not a discretionary matter — were welcomed by advocates and families.

“There is a lot we can work with in this report,” said Chris Beesley of Community Living Ontario, which serves about 12,000 developmentally disabled Ontarians, including about 9,000 in group homes at a time when 12,000 are waiting for beds.

“Overall, we give it two thumbs up.”

Putting one minister in charge reflects the importance of a holistic approach, Beesley added.

Community and Social Services Minister Helena Jaczek acknowledged the committee’s work in a statement Tuesday and said she will consider its findings.

Anne Jovanovic of Ottawa, who has a six-year-old son with autism and participated in the public hearings, agreed.

“I’m thrilled. If even 10 per cent of this gets done, it’ll be huge for us,” she said. “I think it does a good job of covering the concerns of parents (of children) from across the spectrum.”

The report also called for a seamless transition for children who receive direct funding to pay for personal support workers, respite and community programs as they move into adult services. Currently, thousands who receive Special Services at Home funding until age 18 end up waiting years for adult support through the Passport program. The committee said no money should be cut until new funding is in place.

Jovanovich said that recommendation and others aimed at providing more support in classrooms would be a huge help to families.

Gloria Noseworthy, of Innisfil, has been waiting three years for adult funding for her son Zachariah, 23, who has autism and other medical conditions. She hopes the report’s recommendations are implemented soon.

“I can’t have him sitting at home alone doing nothing. He needs to be in the community and actively engaged in something meaningful for him.”

Support worker Joanne Smithers, who was at Queen’s Park on Tuesday, was disappointed the report didn’t stress agencies’ need for more funds.

Adults with developmental disabilities who are living longer have complex needs related to early onset dementia and physical problems that can’t be adequately met while cuts are being made to frontline workers, she said.

“Our concern is we don’t want to see all the money going to individualized funding,” said Smithers, who works at a group home in Mount Forest and took part in the committee hearings.

The chronic shortage of developmental services for toddlers, school-age kids, teens and adults was documented more than a year ago in the Star’s Autism Project. Tuesday’s report is one of several initiatives tackling problems in the sector.

Provincial Ombudsman André Marin is investigating the dire situation for young adults whose parents can no longer care for them, and has received more than 1,000 complaints from families in crisis. He is expected to report this fall.

“It was very important to all of us that services be mandated,” Elliott said Tuesday. “We also felt that (the sector) has been significantly underfunded and unattended to for a long period of time. The only way to make sure people get the supports and services they need is to mandate them. Like health and education.