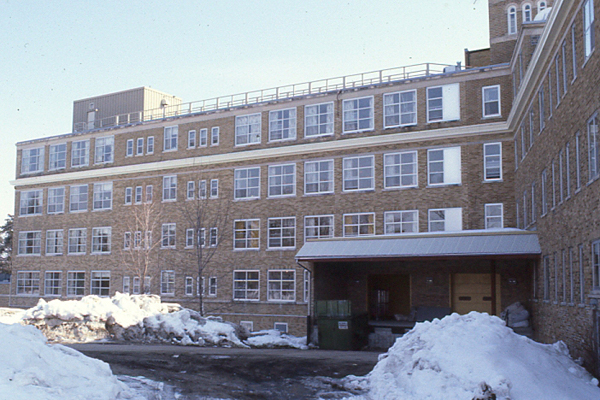 The Quiet Room, or QR, is a reference found in the files of people who resided in institutions for the developmentally delayed. A room is described in the Muskoka Report as follows: about 9 feet by 8 feet with an iron grating about one and a half feet ahead of a window. It has a mattress on the floor with a plastic cover and nothing else. A circular mirror on the wall in the corner close to the ceiling affords observation of each section of the room through a small window in the door. The door locks.

It wasn’t until I found an article written by Brent Cooper for the Gravenhurst Banner (Dec. 2015) titled  Mother talks of abuse at former Muskoka Centre that it became clear that the Quiet Room was in fact an isolation room; solitary confinement where residents were put as punishment. Brent’s article references a document known as the Muskoka Report (September 1985) that was produced by the Ontario Association for the Mentally Retarded after serious concerns were brought to their association by two parents and a resident of Muskoka Centre.

In files that were kept for people residing in Huronia Regional Centre, Rideau Regional Centre and Southwestern Regional Centre and received by Community Living Parry Sound (CLPS), the use of Quiet Room is just one of the means staff used to obfuscate when recording what was happening to people day to day. They recorded when a person was put in the QR and when they were let out, but never why.  “Refused nourishment/lost tokens” is another oft-seen reference without any details. “Aggressive”, “show of force”, “saucy”, “pestering”, and “behavior problem” are all used without context.  It is interesting that not a single reference is made regarding a person’s sexuality or sexual activity, considering thousands of claimants received thousands of dollars from the last settlement for sexual abuse.  We received no incident reports or reports of police involvement.

This is what we had to work with when trying to find evidence of abuse during the last round of settlements which included Huronia Regional Centre, Rideau Regional Centre and Southwestern Regional Centre, and what we will have to work with this time as claims against twelve more institutions have been certified by the Ontario Superior Court of Justice.  It is expected to be settled by April and people should receive their claim packages shortly thereafter. Notifications have already been received.

Joanne Boulding, Executive Director of Lake Country Legal Clinic worked with claimants and staff of CLPS on the previous claims and will once again help people to obtain legal aid, request their institutional files, research those files and notarize their claims. Joanne and her colleagues, who have their main office in Bracebridge have a longstanding relationship with CLPS , use  space at our offices to meet with service users in our area. Previous claimants felt respected, heard and grateful for their support.

We can celebrate that during the last round of settlements many people felt that finally someone believed how bad things were and that they received enough money to fulfil a want or need. However, there were a vast number of people who lived in institutions for decades who received a token amount, not even equalling the amount their support worker earns in two weeks. This was because they could not speak, or speak of it; the very people who were most vulnerable to abuse. Let’s hope we have learned something from the first round that we can use to help people get the redress they deserve.

« Previous
Home is Where the Comfort IsNext »
Graduation Day for the Hospitality and Tourism students!