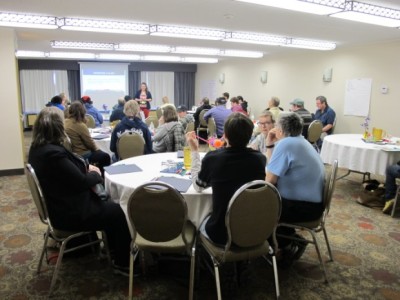 Let’s Learn Together is a two day conference for people from the Muskoka, Parry Sound district and Nipissing district who have a developmental disability. It is a rare opportunity for participants to meet or reunite with one another, to learn from each other and to gain confidence and skill in their ability to self-advocate.

The conference is being held in North Bay at the Best Western, a fully accessible venue, on April 7-8th, 2016. The opportunity to network with peers and professionals in a social environment that is universally designed for people with and without disabilities is an important element of the gathering. The planning committee for this conference consists of six self-advocates from Parry Sound, Sundrige, Huntsville, North Bay and Sturgeon Falls to ensure that the conference agenda is relevant and meaningful to participants.

At the conference participants will attend relevant workshops that interest and educate them including visioning a good life, employment, relationships, bullying and inclusion. Workshops will be facilitated by self-advocates with experience and knowledge to share, as well as by professionals in fields relevant to the interests of self-advocates.

Let’s Learn Together is being supported and partially funded by a grant from the Harry Foster Foundation and by Community Living Parry Sound. Bev Phippen, one of the conference planners, says living with a disability doesn’t preclude someone from making their own decisions and doing what they want to do. Bev says, “We can do it ourselves. There are different ways we can do different things.” Glen Bonde, a participant from Parry Sound paid his $75 registration fee for the conference by collecting cans and bottles and turning them in for money. A challenge for some self-advocates is finding transportation to the event.

Vic Fedeli, MPP Nipissing, spoke at the 2014 self-advocate conference in North Bay saying “It’s my hope these efforts will lead to the elimination of stereotypes and barriers for those living with physical and intellectual challenges”. In the two years since that first conference many people with developmental disabilities have started working in their communities being paid fair and equal wages. Innovative ways to support people to live in their own homes are being actualized across the province and barriers to being fully included in communities are being addressed.

Conference organizers of Let’s Learn Together hope to keep the positive momentum moving by continuing to learn and grow as people; people who are fully capable of creating meaningful lives and of living their dreams.

“We have been proud to be a part of sponsoring this event and are most impressed by the work of the organizing committee.  We wish all participants the very best during their two day conference.” 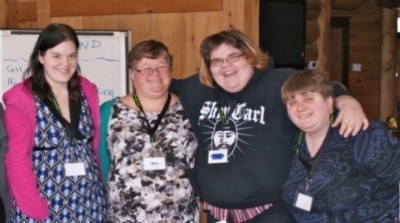 Established in 1962, Community Living Parry Sound advocates and supports people who have an intellectual disability to have meaningful lives in their community.