Rori Bears the Torch for Victory

Former Victory School student Rori Brownley was chosen to carry the torch for the spectacular 2015 Pan Am Games in Toronto because he is a champion. Rori loves two things in life, sports and helping children at school, and he is great at both. 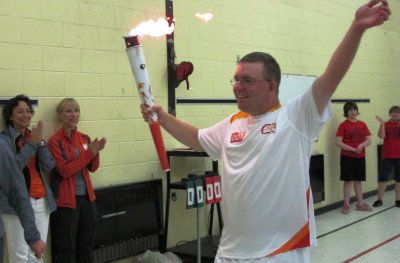 Rori is living his dream.  He actively participates in competitive sporting events from bowling to snowshoeing and he coaches his own teams.  Since finishing his High School studies Rori has volunteered at Victory School for the full school day from Monday to Friday. I spoke with teachers at the school who told me Rori is a huge help; organizing gym equipment, teams, supporting students at chess tournaments and performing a myriad of other tasks. During class time Rori sets up keyboarding sessions in the hall and helps students, using hands-on training tools, to learn to type.

Victory School is where Rori did his High School Co-op placement and it is where he wants to be.  In fact, working with children is clearly his calling. Watching Rori at his job anyone can see that he is capable, responsible and great with the kids who respect and treat him as they would any other teacher in the school. Rori secured a job at Victory School this year as a Lunch Supervisor for two periods a day and is paid a competitive wage for that job as anyone else would receive.

Rori Brownley exemplifies a ‘Community First’ philosophy for full social inclusion of people with developmental disabilities into our daily lives.  Parry Sound deserves to be proud of the way it has welcomed Rori, born with a developmental disability, to provide him with all the support he needs to thrive and live the life he wants to live.  Sheena Calibani has taught and mentored Rori since grade one and Victory School fully supports Rori to realize his goal of working with children within the school system. Principal, Ursula Stilson says of Rori, “he has been an invaluable asset to the school”. Rori aspires to become an Educational Assistant but has met with some barriers to achieving that goal.  With the imminent closure of Victory School Rori’s future with the Near North District School Board is questionable. What will remain unquestionable however, are how valuable his contribution to the children at Victory School has been and the impact his presence has made to that school community. 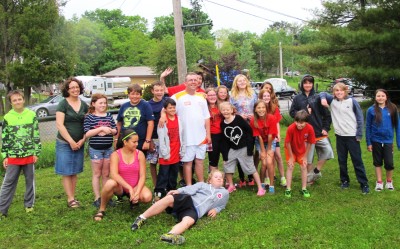 Rori is a fine citizen contributing valuable lessons to elementary school children and he consistently demonstrates stellar sportsmanship in all of his sporting activities.  Rori will proudly carry the Pan Am Games torch and a more deserving Parry Sound citizen could not be found to represent our community.  Beyond the torch bearing, Rori will continue to pioneer the way for a new generation of kids born with developmental disabilities who are being raised in a more inclusive educational and social system. With the encouragement of his mother Kirsten, who is an amazing advocate for her son, family, support workers, teachers, parents and staff from Victory School supporting his aspirations, Rori will overcome all obstacles in his way to a meaningful life with friends, co-workers and children to inspire with his positive attitude and determination.